“There was definitely a point that I had to accept not letting failures or my interpretations of failures affect me.”

South Australian pop vocalist Emily Smart has carved out a multifaceted music career which encompasses performance, song writing, grant writing, rehearsal studio management and voice over work, while also developing her own business. As she explains:

“There’s always something different going on… It all sort of feeds into each other but there’s a lot of random things.”

Recognising the need to be dynamic in her approach to making a living, Emily also balances her musical endeavours with her own small business in real estate property management which affords her financial sustainability and flexibility to continue pursuing music. Despite this flexibility, Emily explains that working across so many music roles, as well as combining music and non-music work is quite a juggle (“organisation is key for me, and lots of planning”), further impacted by perceptions around how seemingly unrelated fields can work together and ensuing attitudes around her as a professional:

“If I was to introduce myself as a property manager and also a singer or something like that, it would be a bit strange; people don’t really correlate the two as something that could go together.”

Musically speaking, Emily works across a variety of roles out of a combination of needing to generate a liveable wage, as well as desire to continue to be creatively inspired (“there’s not one thing that’s sustainable enough”). The main source of income she derives from her music work is through a rehearsal space she manages with her partner, with additional money generated through paid performances, song writing royalties, music synching, sitting on peer assessment boards, and hosting music based workshops. Networks have been critical to Emily being able to work across so many roles, and in her ability to obtain work, as she reflects:

“Without connections you’re on your own. There’s no-one really thinking about hiring you or getting you involved in their projects, so it’s pretty pivotal to expand your creative reach. If you’re not actively getting involved with the industry, or getting out there and talking to people, then most people won’t know about what you do or how you do it, and it’s less likely that you’re going to get the opportunities that you need to help you generate more work and sustain what you’re doing.”

While networks are critical to the sustaining of Emily’s career, she recognises that networking is a skill in of itself, and doesn’t always come easily:

“I was always quite a shy person and not necessarily very outgoing to talk to people, but I have found that it is really important to make the effort […] And also, for you to have interest in others work too. You just don’t know where anything can lead. One conversation can lead you to writing a song with someone, it can be as small as a conversation to generate something amazing or create work.”

Having played music since she was a child, and identifying as a musician from age 16, a combination of having studied music at high school through until Year 12, piano, bass, guitar and vocal lessons formal audio engineering training, as well as a Bachelor of Dramatic Arts and Master of Marketing, have been vital to how Emily has learned how to be a musician and, in turn, how she navigates her career. She says, however, that she highly values learning by doing (“I think it is a personal learning curve for everyone to try and to piece together their unique spot.”) and relies on the Internet to learn and teach herself new skills. She similarly sees that the emergence of a range of new digital technologies and social media platforms has changed the ways in which she is able to navigate the day-to-day practices of her music career:

“I don’t remember having to call up and ask for a gig in the last ten years. It’s all [done via] emails and online and [is] based on your social presence […] The social media and the options online now to promote yourselves and to get in contact with people are a lot easier than they were a long time ago.”

It is well understood that the digitisation of the music industry has seen a shift in the ways in which profits are generated, and have created a new set of financial challenges for musicians in being able to financially sustain themselves. It is this challenge which has had the biggest impact on Emily’s career, influencing her diversification across roles (“it’s become even harder for the smaller acts to make money”). She explains that the reward of creative expression outweighs the financial loss associated with pursuing her career, however,

“I think it’s just a matter of how long you take it for or keep kind of putting in and hoping that it reaped the rewards; that it’s worth the time and that’s what you put in.”

For Emily, focusing on the small wins has helped her maintain a sense of success as she has navigated her career. She explains that a key aspect of this has been being happy for other musicians along the way:

“A lot of people feel that it’s hard to be happy for the other people around you doing well because, if you’re not doing well at that time, and you’re sitting there wondering ‘Why? I’m making just as great music as they are?’ you’ve got to at some point realise that’s not healthy —but not comparing yourself to everyone else is just really hard to do, because you know you’re working just as hard and it’s just the way the industry is […] It’s something that I also had to learn, to not compare what I was doing to anybody else and to actually make myself happy for anyone I saw doing well, and not make that part of my journey. And I think it’s important to be happy for people because it all feeds into the industry, it all helps everybody really, for people to do well.” 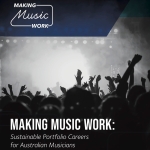